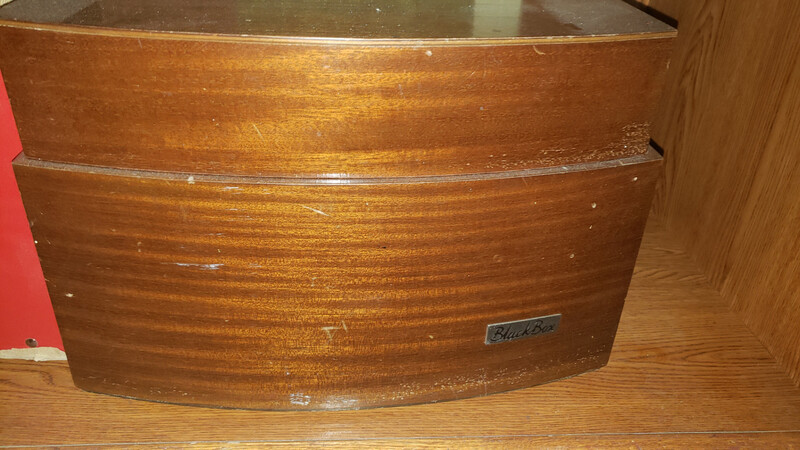 ''Mutton Dressed as Lamb''. This would have looked fine in a parlour during the 1950's. The Pye Black Box was designed to fit in with expensive decor of the time, and certainly wins here. Unfortunately its performance does not, similar to today's so called Hi-fi systems looks sell, the sound is of no consequence. Pye must have invented the catchphrase 'BOXY' any true High Fidelity enthusiast of the time would not be impressed. The Pye Black Box Range started in 1954 with their original model using an inexpensive crystal Cartridge on a BSR turntable with an amplifier consisting of two EL42 valves in push pull configuration and two speakers wired in parallel on either side of the cabinet. There were four variations in this design. In 1958 the second range of models arrived including this one the BBA version (as shown), the Amplifier used two PCL83 valves (Triode Pentodes) again in Push Pull, these valves were designed for use in the audio output stage of Televisions using the other section of the valve as a pre -amp, Why Pye chose this valve is probably obvious (economy). Together with this change two additional tweeters were added (high frequency speakers), a bit pointless as the amplifiers frequency range could not drive them, if it could have done it might have improved the sound considerably. Also the BSR deck in the earlier version was changed for a Garrard AT6 Auto Slim auto-changer using again an inexpensive Crystal Cartridge having a dual tip being LP/78 rpm change over stylus. The Pye Black Box was still an icon of its era if you could have afforded it, at Ł31.0.01d Plus Purchase tax. Nearly two weeks wages for some in those days. Release date 1958. Valve compliment 2 X PCL83 1 X ECC83 and a metal rectifier.